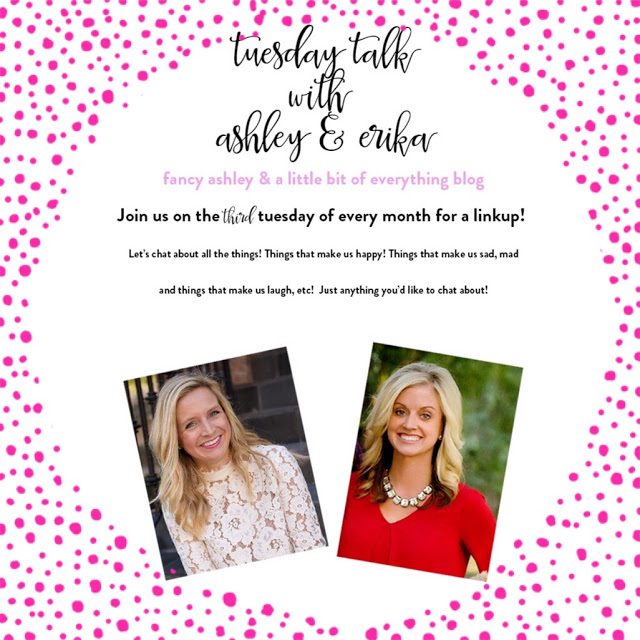 It’s time for Tuesday Talk with Fancy Ashley and Erika!

This month, I have a question for all the mamas out there.

This is a long one!

The Hubster and I had a 3rd of July party and invited our co-workers, neighbors, and friends (basically everyone we know here) over for a BBQ. Since a lot of our friends have kids, we obviously included the kids because I don’t want them to have to find a babysitter when they could totally just come over to our house.

I have toys, both inside and outside, for any kid that comes to hang out at our house. It stemmed from wanting to have something for my nephew to play with. And bloomed into when our friends are visiting.

I invited J, a casual friend and told her to feel free to bring her 10 year old son, R.

Upon arriving, R marched over to me and asked “who else is here?” I wasn’t really sure who he knew and was a little bit surprised by his question, so I directed him to the kids playing baseball and bubbles outside.

I didn’t really think much more about it until I saw him fling a frisbee onto the roof. I went over to see what was happening and he said to me, “go get the frisbee off the roof.” No please, no asking nicely, just a demand.

I’m short and there was no way I was getting it off. Before I could go get The Hubster or a  taller human, R started to throw a jump rope on the roof in hopes it would come back down. I stopped him. Another friend stepped in, found our ladder, and rescued the frisbee.

I kid you not, R took the frisbee, threw it on the ground and marched into my house. He then proceeded to jump on my couch and got our 5 year old neighbor B to jump with him.

He looked at me like I had slapped him. And then started to turn on my TV and said he was going to play XBOX.

I said, “we’re not turning the XBOX on right now, why don’t you go outside with the other kids?”

B said okay and went outside. R started rearranging my living room furniture. I stopped him and his mom came inside, so he laid on the couch and played with his tablet.

I figured since his mom was inside with him that she would pay attention to him.

I came back inside a few minutes later to get someone a drink and R resumed rearranging my furniture and had flung the pillows, cushions, and blankets around. I walked over and he quickly put it all back.

I got super mad and had to go outside.

I like kids. I have a toy box of stuff for kids to play with inside my house and a whole large bucket of outside toys. I get that kids are kids. My 2 year old goddaughter dropped a red market on my white carpet and I laughed and we cleaned it up because she didn’t know better. Our good friends have 4 kids and never once have they jumped on my furniture.

But this kid? He should know better and his mother should have paid attention to her kid at someone else’s house.

So mamas – am I out of line? I feel like the meanest person in the world, but this kid was going to destroy my couch and electronics. Have any of you encountered this? Should I have done something differently?

In January, I had some girl talk about getting pregnant.

In February, I shared some random thoughts running through my mind.

In March, I shared how I hate working out.

In April, I asked about car washes.

In May, I asked how you feel about thank you notes.

In June, I asked all of you about vacuum cleaners.