After our trip to DC and Hershey, we realized that we had to be in Philadelphia the next work day and it didn’t make sense to drive back home, only to pass where we were to get to Philly.

So we made a pit stop in Gettysburg on the way.

I have a confession before we start.

I did not retain US History in my brain as well as I thought I did.

When we toured Gettysburg, I realized that I had a vastly different idea about how the Civil War ended.

I have since purchased a US History book and think it’s best I read and try to comprehend.

The Hubster downloaded a driving tour app of the battlefield, so here is where we started.

The town is adorable. I’m glad they kept the old feeling of the town.

There are also some historic buildings that have been around since the 1700s.

There were monuments all over the battlefield that paid tribute to pretty much every person that stepped on the grounds.

For instance, I didn’t get a picture of it, but there was a dog that would sit with wounded soldiers and he got his own monument.

One of the first shots of the battle happened here.

Good thing we stopped to look at these markers.

I liked that they had pictures of what it looks like today with arrows pointing to where things happened.

You can’t see it, but there’s an eternal flame here in remembrance of the battle.

Franklin Roosevelt stood on the platform right under it to give a speech.

This is the beautiful view from Little Round Top.

The Union soldiers were stationed here and could see when the Confederates charged forward.

This seems like a bad strategy. (Turns out it was).

They can see you coming.

But hey, I wasn’t there.

I took this selfie and The Hubster then said to stop because people died here and it’s a former battleground and get over myself.

He was right. (sigh) 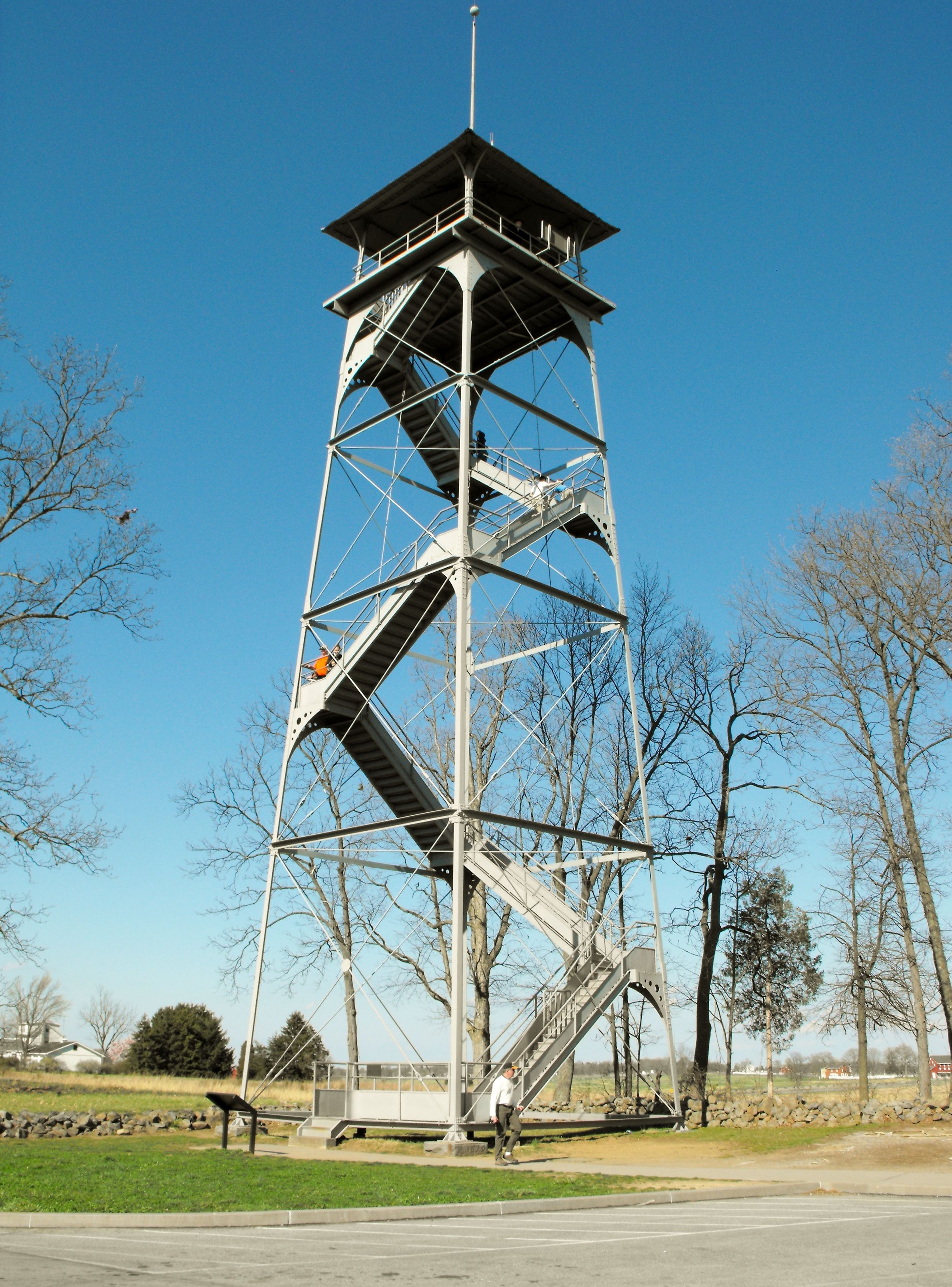 We climbed up this metal tower and I took zero pictures because:

#2 – I’m terrified to go up stairs like this. Thank goodness they weren’t see through grates or I wouldn’t have gone up.

#3 – I have this awful fear of falling off these things. So I held on for dear life the entire way up and down.

#4 – When at the top, I sat on the bench, looked around, and tried to read the signs without actually moving.

I was legit shaking when I reached the bottom.

I was really proud of myself for going up, but it was scary.

I didn’t realize that they had people buried here in more recent times.

Some of the people were in WWI and passed away in the last few years and some are from Iraq and Afghanistan.

This was a beautiful place to have a final resting place.

Makes me so grateful for their sacrifice.

This is the exact spot where Abraham Lincoln gave the Gettysburg Address.

(Which I used to have memorized.)

It’s crazy to think that such an important man stood here so many years ago.

After we left Gettysburg, we headed to Philadelphia, where we promptly ordered room service and stayed in for the night.

I mean who doesn’t love some wine, mac and cheese, and Family Feud?!?

After a day of meetings, we headed out to sight see and ended up at the Art Museum to see Rocky!

Of course we did the stairs! 🙂

It was too hot to run so we walked. haha

This is what it looks like at the top.

Seriously – you can’t go to Philly and not see the Liberty Bell!

He just stands there all day to make sure no one touches the Liberty Bell.

He was not a happy camper.

And I’m sure I didn’t make it better by taking a selfie with him.

There weren’t any openings for a tour this time.

We found a cool tavern and had some drinks.

My last pic of Philly was out my hotel room window during a conference call.

Not a bad view, huh?