We just got back from our April trip and let me tell you – it did not disappoint. I also have approximately 8 million pictures, so I’m going to break it up into 2 posts for you!

Like the rest of America, I am a huge fan of Fixer Upper. So when we started talking about going somewhere in April, I was all like, hey, let’s go to Waco.

The Hubster agreed and we did a minimal amount of planning.

So minimal in that 3 days before we left, I finally booked the hotel we were staying at in Houston.

I need to get better with that stuff. 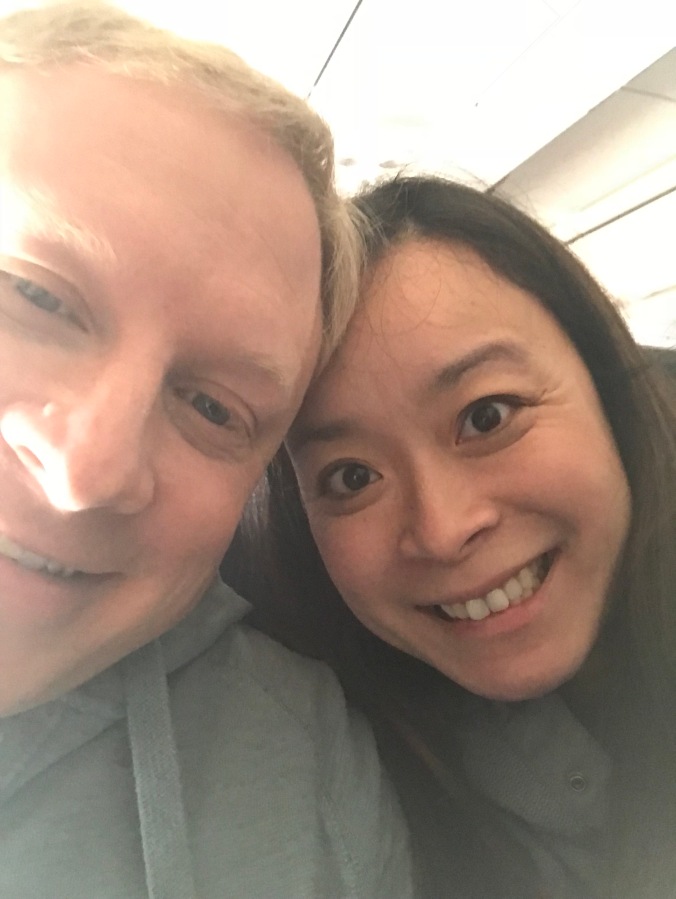 This is what we look like when we have to get on a 7am flight. My eyes are super wide open because I’m pretending that I’m awake until we can get to the coffee. 🙂 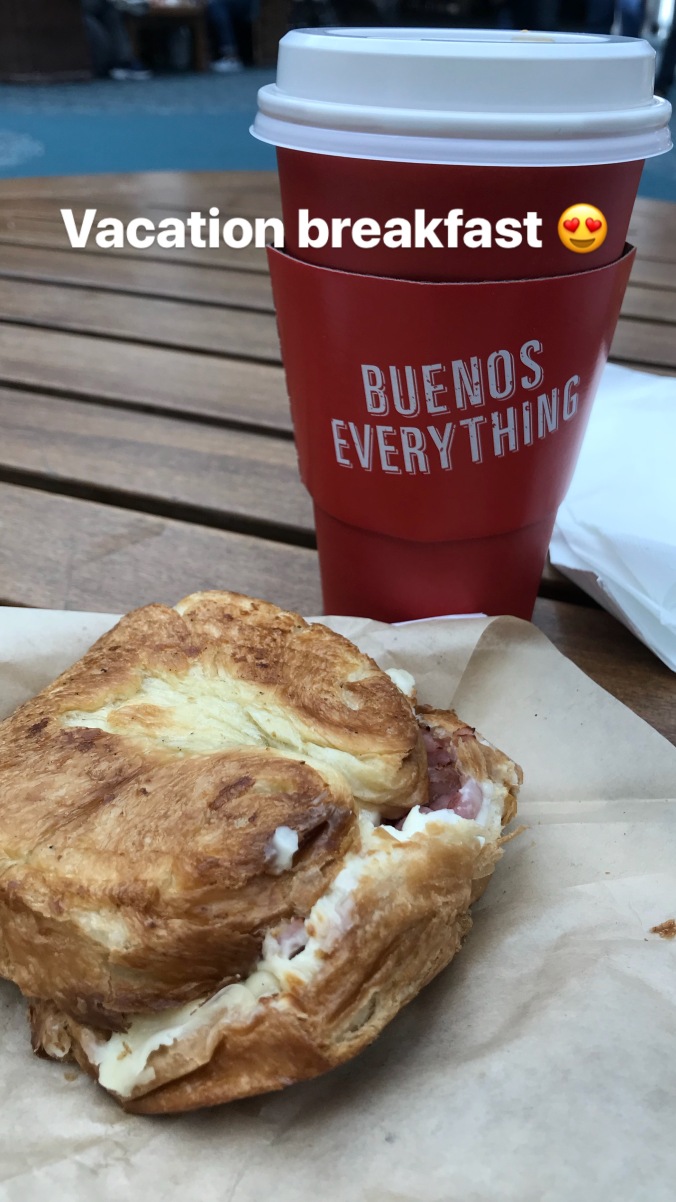 There’s a fast food restaurant named Zaza in the Orlando Airport and it’s all the things. Their cafe con leche is amazing and these breakfast croissants are pretty much something I want to eat every morning.

I have no idea if it’s a chain or if there are any not in the airport, but we totally stopped there during both of our layovers.

And then I stopped for magazines and who didn’t love the Dawson’s Creek article? The Life Hacks are amazing. And yes…Michael Jordan is the greatest of all time. 🙂

After coffee, we are much happier humans.

We have determined that all of our trips really turn into us eating constantly.

After we checked into our hotel, we hit up Torchy’s Tacos.

I’ve heard about Torchy’s from some of my Texas peeps and it did not disappoint.

The chips and queso was so good that I was angry that I was full and had to stop eating.

After Torchy’s, we went back to the hotel and just relaxed and I took a nap. We had been up since 4am and I needed a little snooze before we did anything else. 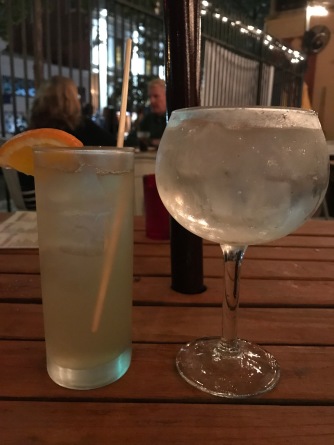 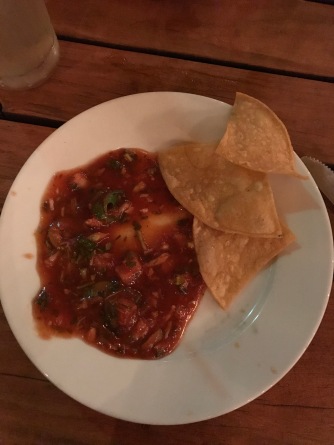 Turns out, we weren’t that hungry from eating a giant taco meal a few hours before, but we decided to try out a cute tapas bar across the street from our hotel.

This is our fun drinks and this amazing salsa with homemade chips.

Since we were at a nice place, I figured licking the plate would be frowned up.

Saturday morning, we woke up and had brunch with one of The Hubster’s old roommates and co-worker.

I’m bummed I didn’t get any good pictures with them, but it was good to see Ben and Jenny and their adorable baby daughter. 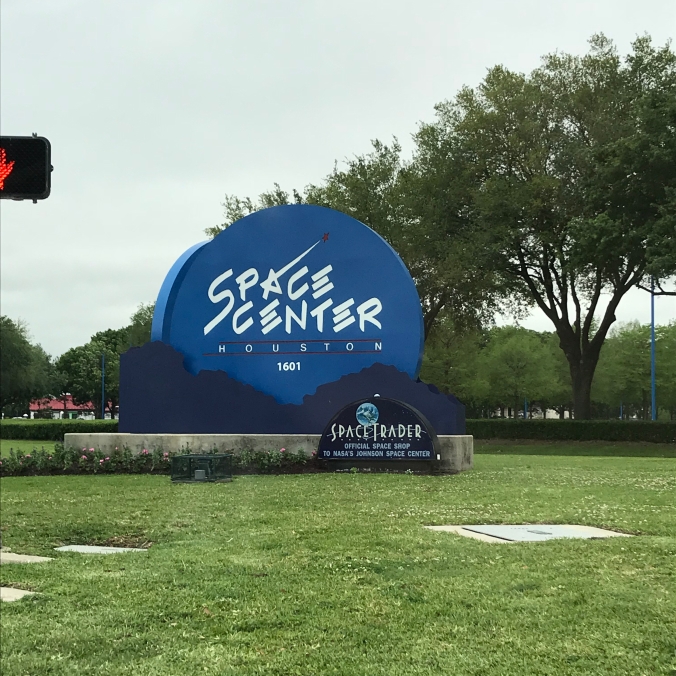 We then headed to the Space Center.

If you’re confused about why we would go there, it’s the “Houston, there’s a problem” place from Apollo 13. 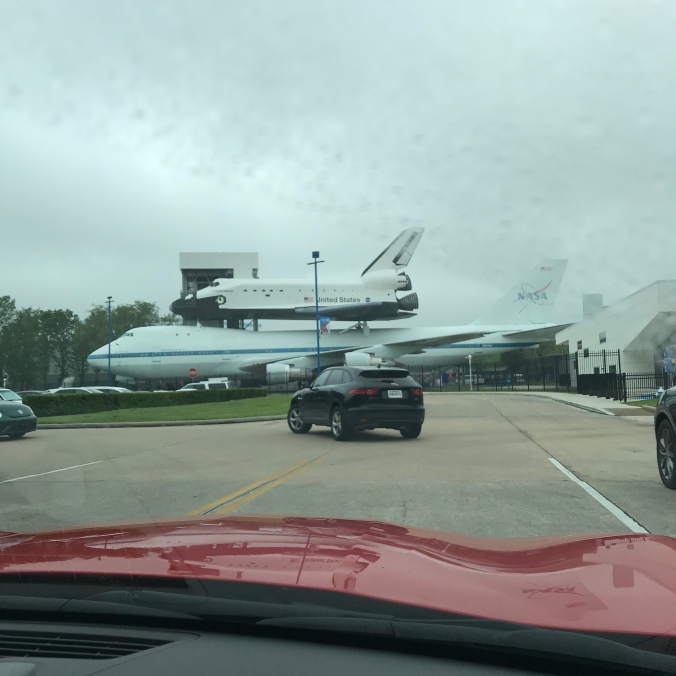 (Side note: this is a replica space shuttle and plane. So while it’s awesome for scale, it’s not the real deal that was never in actual outer space.)

Once we got into the museum, we realized that there was a tour of the grounds, which The Hubster desperately wanted to go on, so we got in line. 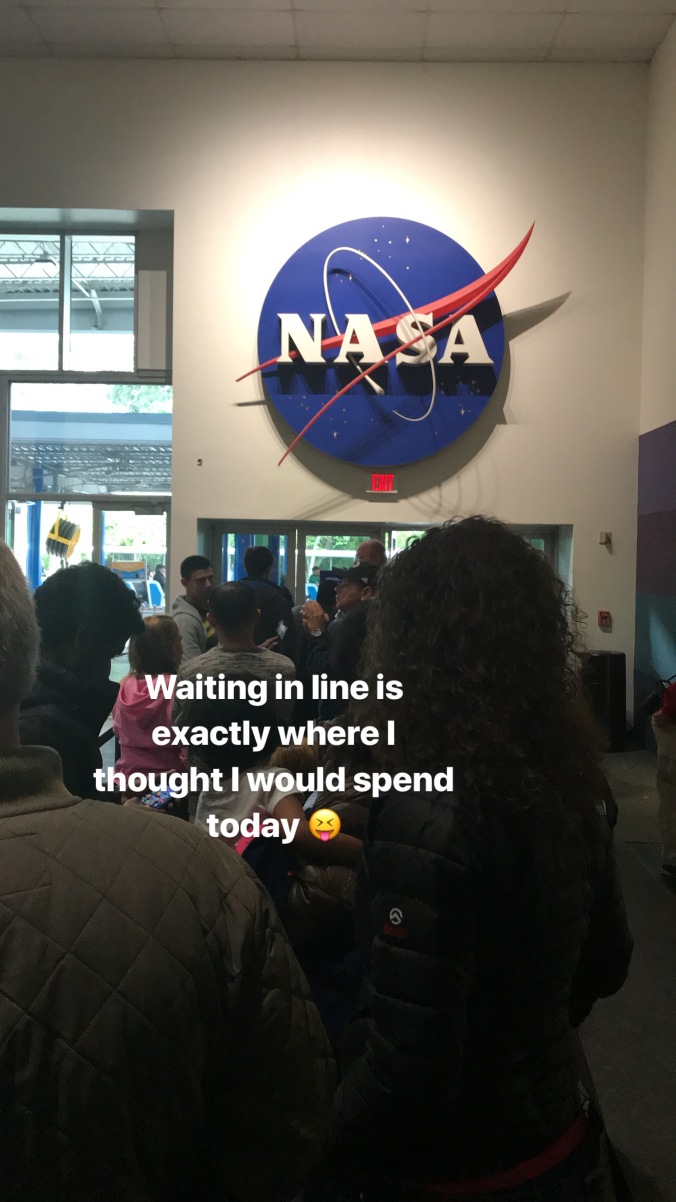 I got this fun badge out of it at least! 🙂

This is the Mission Control room that will be used for the Orion program (when we send space ships and people to Mars).

While there weren’t any people in there now, in about 5 years, it’ll be jam packed.

From there we went to this other building where they do tests to see how astronauts would drive in space and can live in these pods.

I’ll be totally honest – I kind of tuned out here and am not sure what exactly all of this stuff is for.

The rocket on the left is the first rocket that they ever sent a man up in orbit with.

Also, the thing on the right is one of the 10 engines on board when they sent space ships in the Apollo missions.

Yes, I’m well versed in the missions and rockets of NASA due to fact that The Hubster has watched When We Left Earth every single year since I’ve known him. 🙂 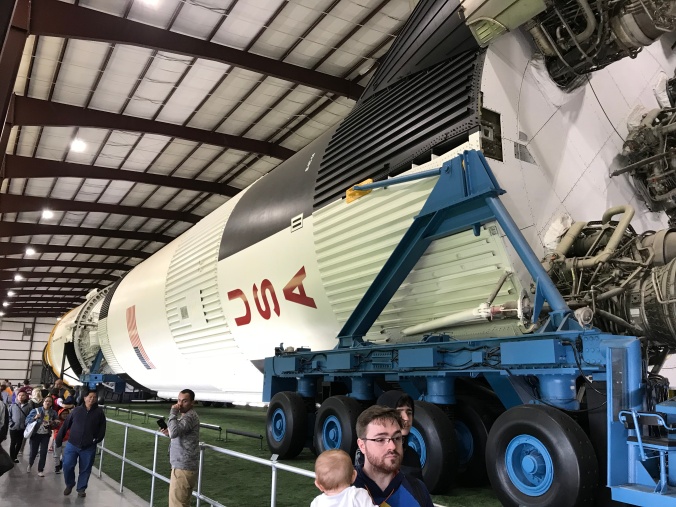 This is a Saturn V rocket – it flew in all of the Apollo missions.

You can see how big it is next to the people – the hanger we were in was giant!! 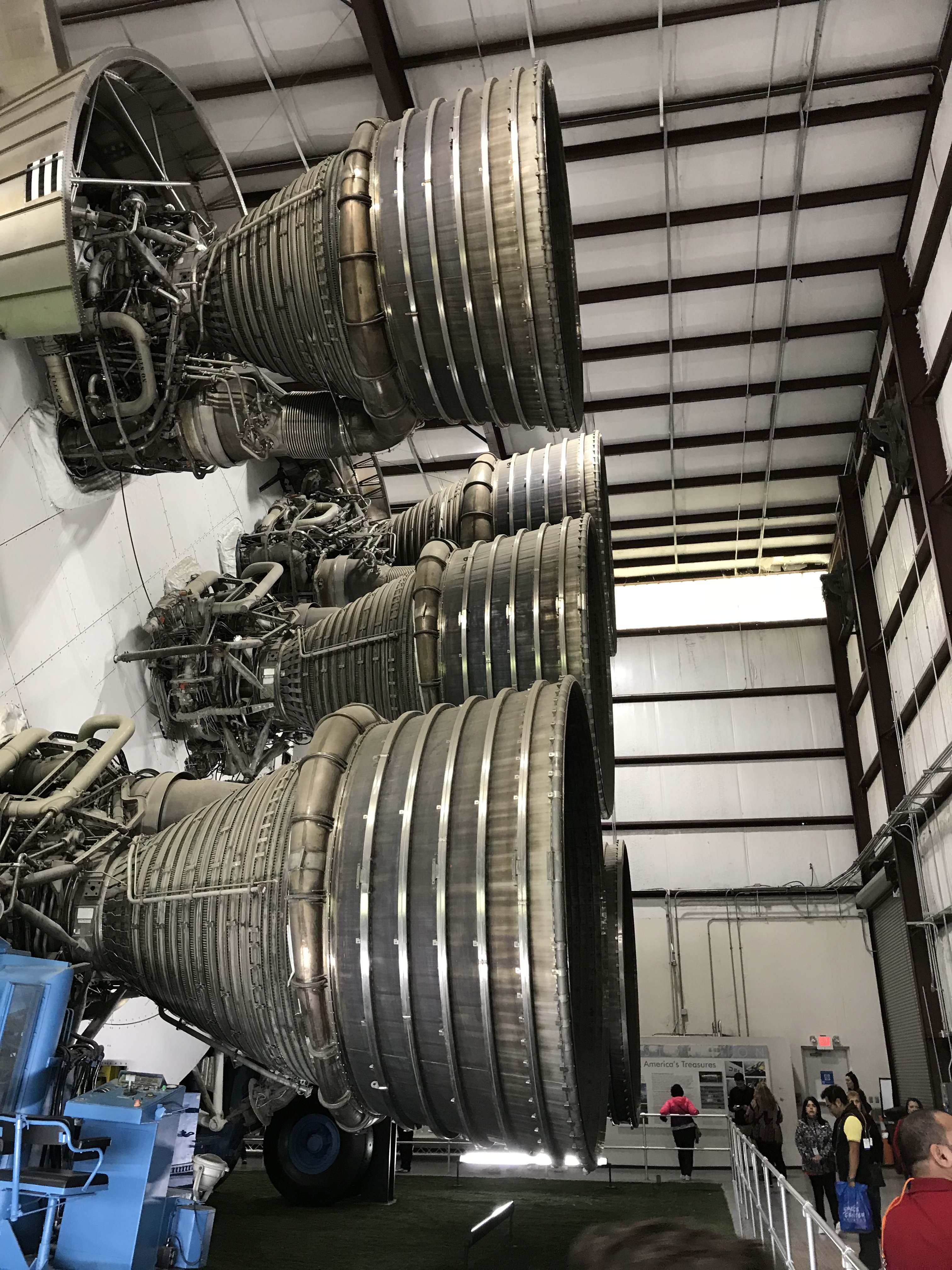 These are the engines that we saw outside – now you can see just how amazing they are. 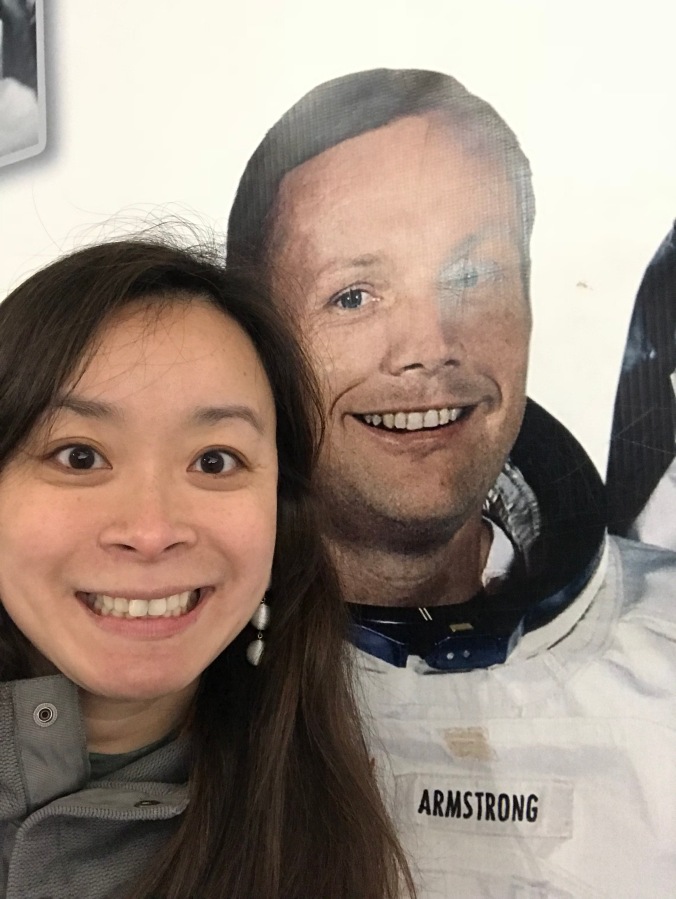 And then after about an hour of wandering around inside this building, I got bored and started taking selfies with the astronaut pictures.

This is me and Neil Armstrong.

You know, right after he walked on the moon. 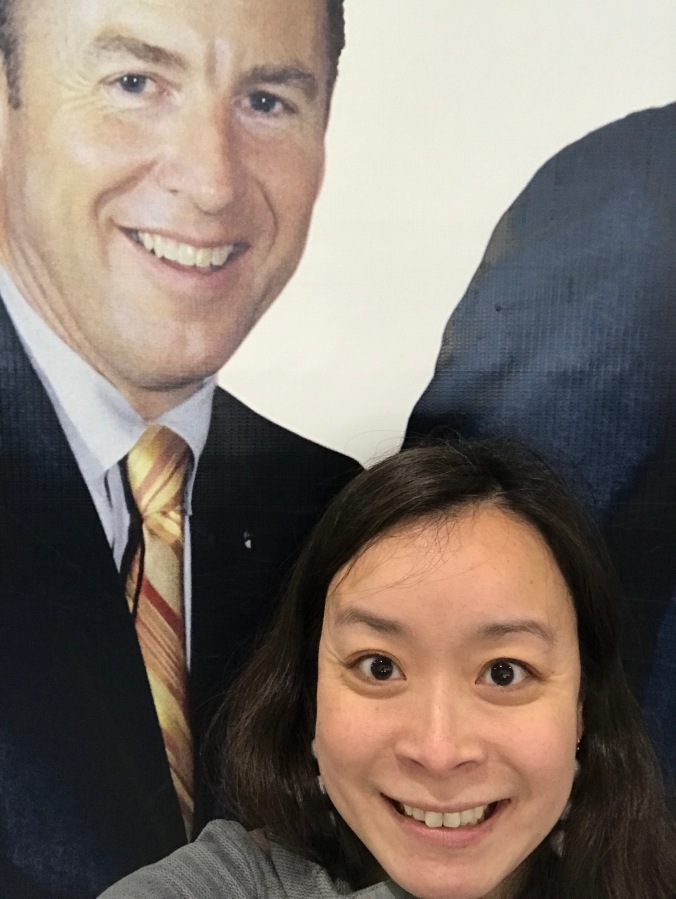 This is me and Jim Lovell. Or as the rest of us know him, Tom Hanks in Apollo 13. 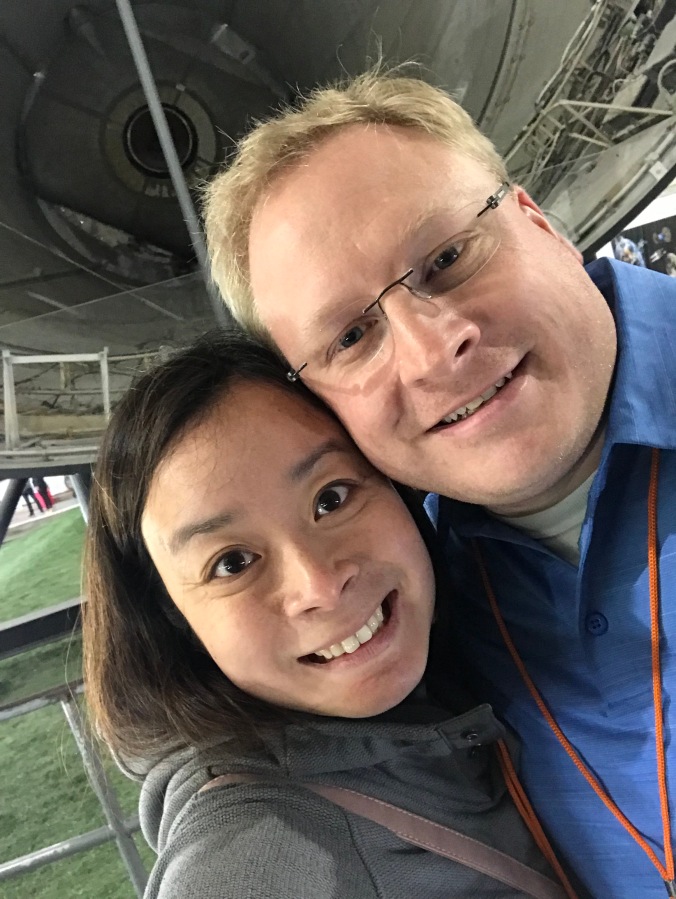 I don’t think there was a happier guy in this place the entire day.

At this point, I was starting to get hungry, so I popped into the cafeteria for some space fries.

They were quite tasty.

We headed back outside. I can’t even begin to tell you how cold we were.

It’s Texas right? I thought I’d be wearing shorts, but it seemed a little chilly when we left so I grabbed a hoodie. Thank goodness! The day started at 65 and when were were outside for the tour, it was 45, windy, and raining. The Hubster had to run into the gift shop for a coat of some kind. He settled on a NASA hoodie.

The Hubster is walking on the bridges the astronauts use to get into the space ship and I’m trying to stay warm by distracting myself.

We left soon after that because (a) 5.5 hours at the space museum was kind of enough for me and (b) they were closing. 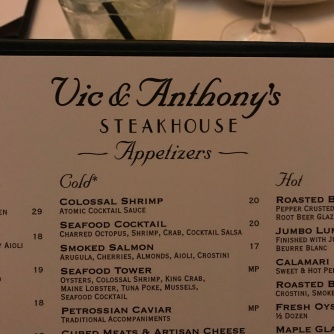 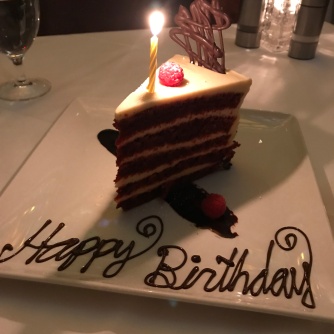 We headed back to the hotel where I changed and we headed to Vic & Anthony’s for dinner.

I had been there many years ago for work, but when we went back, it did not disappoint.

I got a waygu filet minon and it was basically melting in my mouth.

Or was that all the butter on it?

Who cares – it was soooo good!

And I even got a special birthday treat!

I have no pictures of the two of us at the restaurant looking nice. Kind of sad!

I’ll be posting the rest of our trip later but sneak peak…it includes a trip to Magnolia Market!!