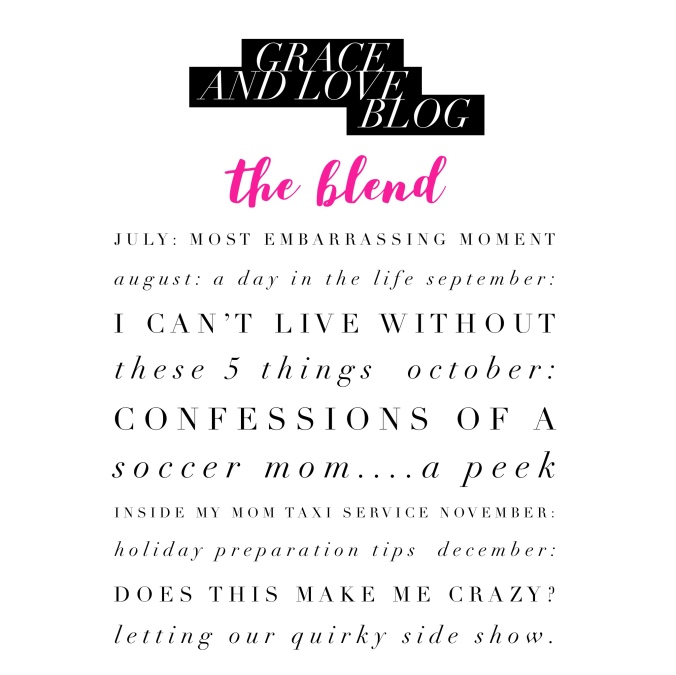 I’m doing a new link-up called The Blend with Narci!

Every 4th Tuesday of the month, we’re going to talk about something new!

July’s topic is our most embarrassing moment.

I don’t think I have any Steve Harvey moments in my past.

But I do have a doozy of a moment that I blogged about last year here.

We’re calling this “the car incident” and it happened a few years ago.

A few things to note: yes…The Hubster and I work together – we start at the same time, we work at the same place, but we do not drive together. There are a variety of factors, but as a general rule, we do not car pool. Also, my car is a 6-speed manual drive.

It was a cold November day and I thought I would be nice and start both my car and The Hubster’s cars so that they would be warm before we left for work.

My usual routine when I do this is to get dressed, run downstairs and start the cars, come back inside to finish doing my hair and makeup, and then get into a warm car to drive to work.

So I did just that. I got dressed. Ran downstairs and started both cars. Came back inside to finish getting ready.

I ran into the driveway and found my car, running, in the middle of the street. Like it had backed itself down the driveway and stopped. Thank goodness we live on a very small street and the people next door didn’t want to leave. Because they wouldn’t have been able to get around my car.

Thinking that maybe no one saw this, I ran down the driveway to get in and found that the doors were locked.

I continued my freak out by running inside and yelling “my car is in the middle of the street.”

This was, of course, a day that we had a co-worker staying with us and he was sitting on the couch waiting for The Hubster to come downstairs. He started laughing and went outside to confirm that yes, indeed, my car was in the middle of the street.

The Hubster comes downstairs at this point and tells me to calm down and find my spare key. I tell him it’s in the pineapple, which is this pineapple dish we got from Hawaii where we keep all of our spare keys.

The key is not in there.

My car is running and locked in the middle of the street.

I have no idea where my spare key is and then The Hubster realizes he used it awhile ago and didn’t put it back.

He ended up finding it in the pocket of one of his coats.

I grabbed the key out of his hand because being nice and civil was totally out of the question at this point.

Being unable to have rational thought and conversation, I ran back outside and tried to use the unlock button on my key fob. It wasn’t working and I started to panic even more.

And in my panic, I hit the red panic button.

So now, my car is locked, running, in the middle of the street, and the lights are blinking and the horn started honking.

I look up and my neighbor is walking his dog and waves to me.

I could have cried.

Thankfully The Hubster grabbed the key from me and used the actual key in the lock and the door opened.

Both he and my co-worker died laughing while I got in the car and drove to work.

When I got home that night, we realized this entire incident was captured by our security cameras.

So I present to you the car incident.

Please pay attention to the upper left screen and remember that no one was in the car.

This is what happened. When I started the car, I forgot to keep the emergency brake on and the vibration from the car running must have made it start to move and since the driveway is a hill, the car rolled.

It must have picked up enough speed on the way down to automatically lock the doors, which is why I couldn’t get in.

We just about died laughing when the car bounced off the tree and then see-sawed back and forth.

Thank goodness no one was walking on the street. And that now there is a house there so yikes – I would have been in their garage!!

I park in the garage now, so we don’t worry about this anymore!!! hahaha

Hope you guys enjoyed some comedy for the day! 🙂

One thought on “The Blend”