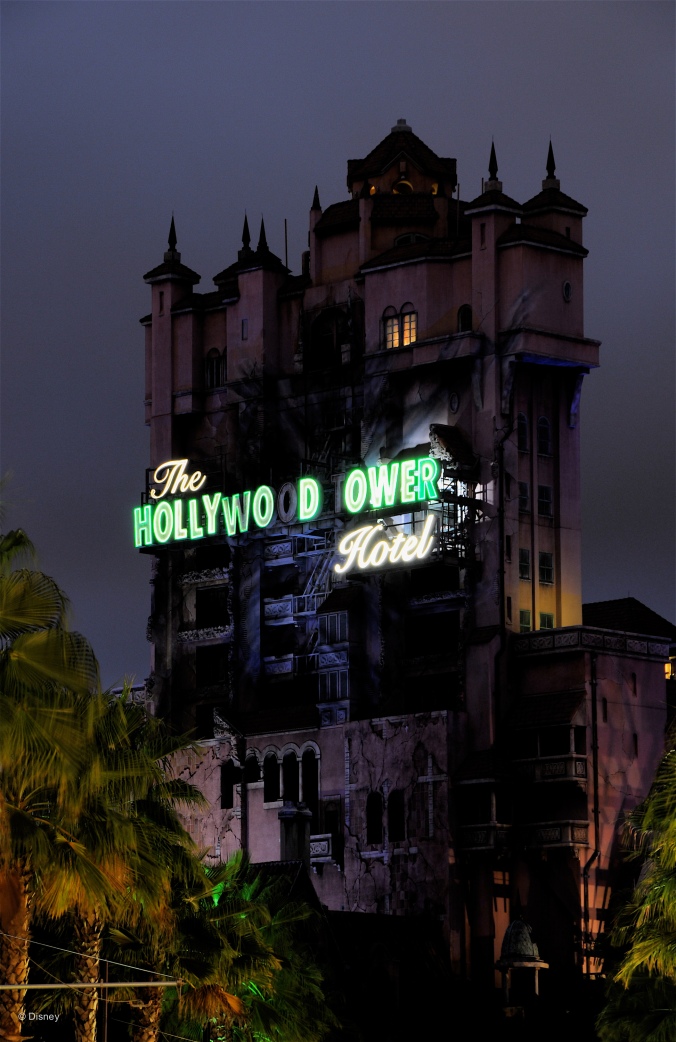 We spent our last day at Disney in Hollywood Studios.

It was also the first day we “got a clue” and planned some stuff out. By planned stuff out, I mean we made 1 plan for the first 2 rides of the day.

The last day of our trip got a little confusing – The Hubster had to leave to come home and I was staying and flying to DC in the morning. The Hubster’s flight left at 8:15pm, but Disney wanted him to be on the bus at 4:50, so we knew we had to get everything done in the park by no later than 3:30-4 so he would get back in time.

Because of this development, we decided to get to Hollywood Studios when it opened at 8 and go right for the 2 big rides we wanted to go on – Rockin Rollercoaster and Tower of Terror. 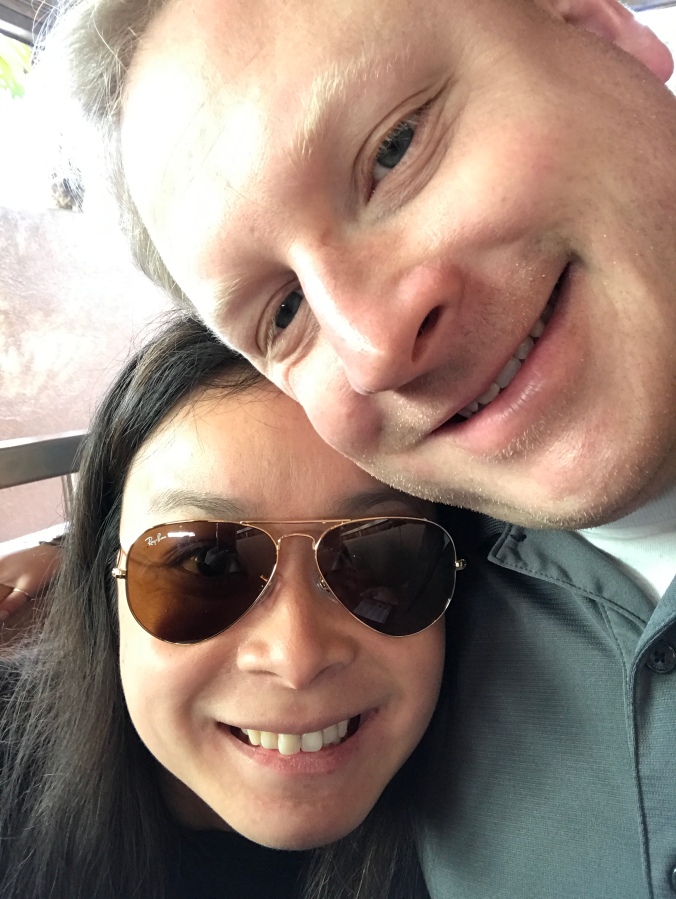 The faces of 2 happy people who go to the park on time and who had no idea what was in store for them. 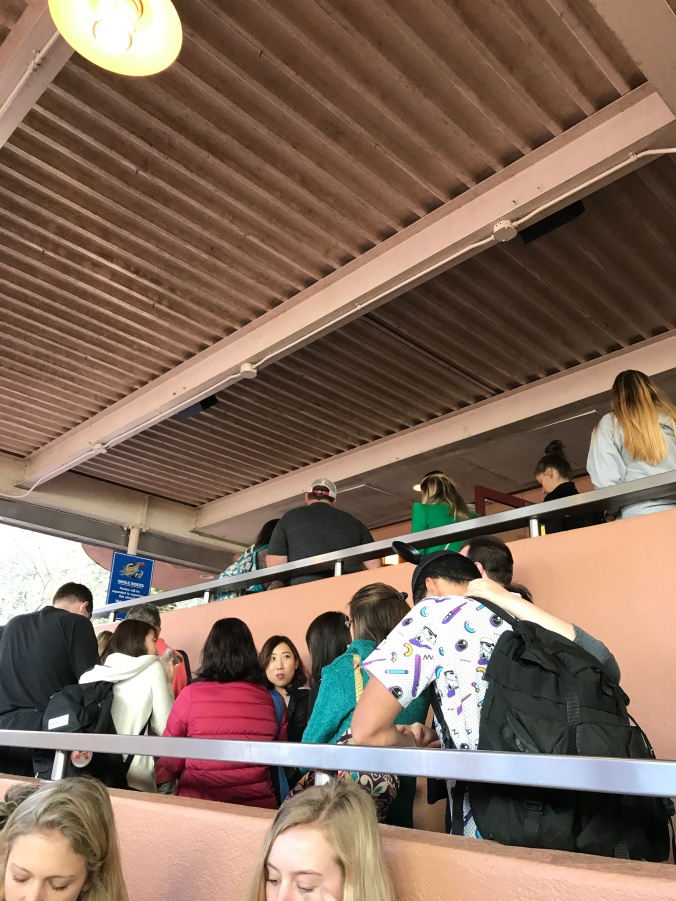 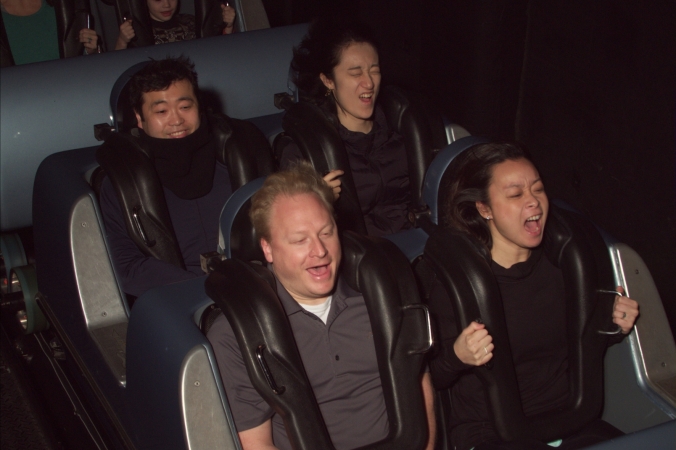 It was obviously worth the 20ish minute wait. You can see I was a little surprised by the ride. hehe

We then headed immediately over to the Tower of Terror. 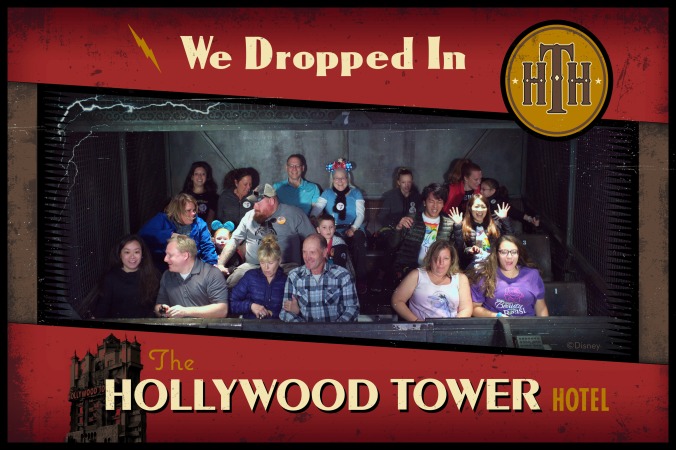 Now you go up and down a few times and it’s random and dependent on the computer algorithms.

This is a picture of me feeling super nervous about the ride.

What’s not shown in this picture is that after the 6th (yes!) drop, I was holding on to the bar for dear life and screaming in actual fear.

The Hubster found this hilarious and watched me scream and laughed the entire ride.

It was fun and I was super glad that it was over.

I’m also not ashamed that the little girl behind me (in the blue ears) had the time of her life and was not scared at all.

From here on out, if you understand how Hollywood Studios is laid out, you’ll question what the heck we were doing, but it’s true, we had zero order/plan. 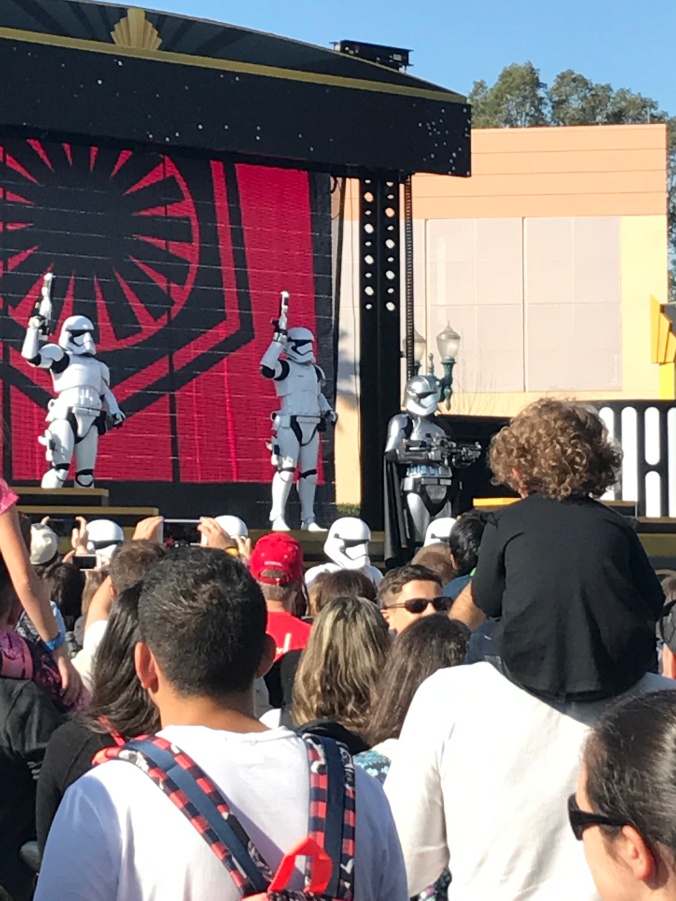 Every half hour there’s a Star Wars presentation in the middle of the park. We watched one of them and it was fun to see. It’s also a little bit creepy because it really does look like an invasion is happening. 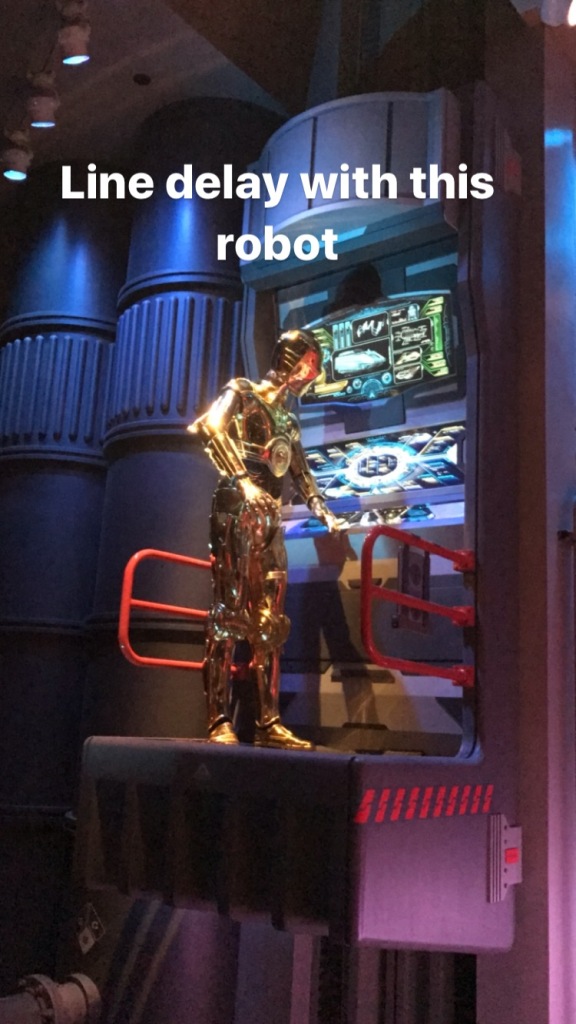 We got in line for Star Tours and the wait time said 20 minutes. No problem.

After about 5 minutes, we heard a lady say, oh, the estimate is wrong, it’s more like 50.

After 50 minutes, we found out that one of the rides was broken and they were only letting fast pass people through.

They must have gotten it up quickly because 20 minutes later, we were on the ride! 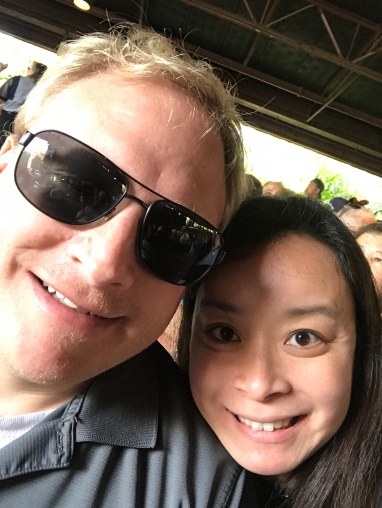 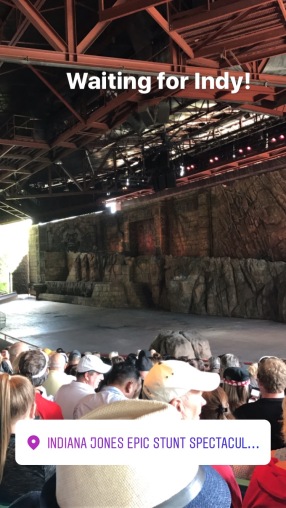 The Indiana Jones show is so much fun. I highly recommend it. We thought it might be cheesy but it turned out to be really a fun show to watch.

Definitely get there a decent amount of time before the show. We got turned away for one of them. Luckily they run every hour and a half or so and we saw the next one. 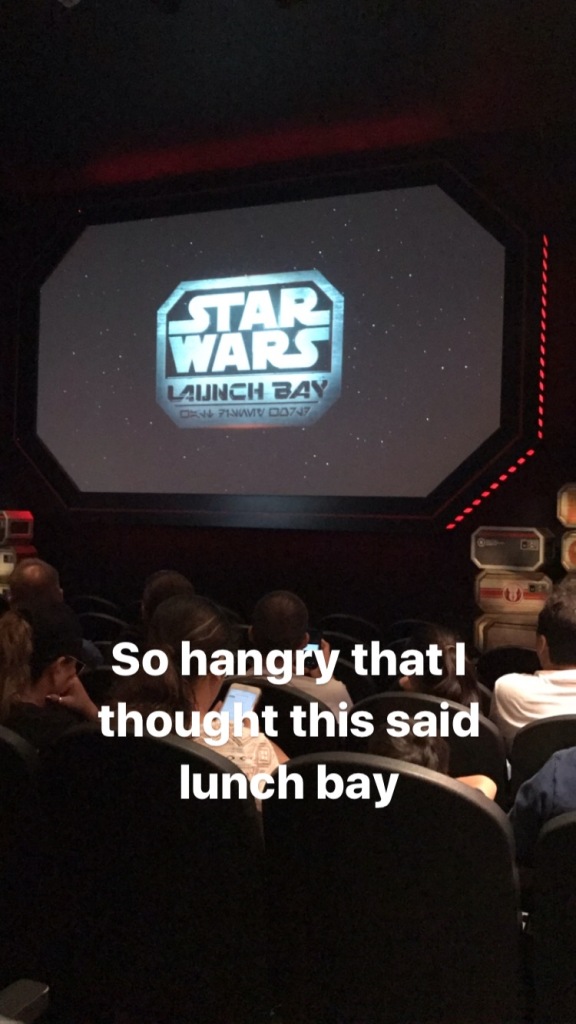 Somehow we ended up at this Star Wars movie while we were trying to find some lunch.

It was quite disappointed because I thought this was a Star Wars lunch place. 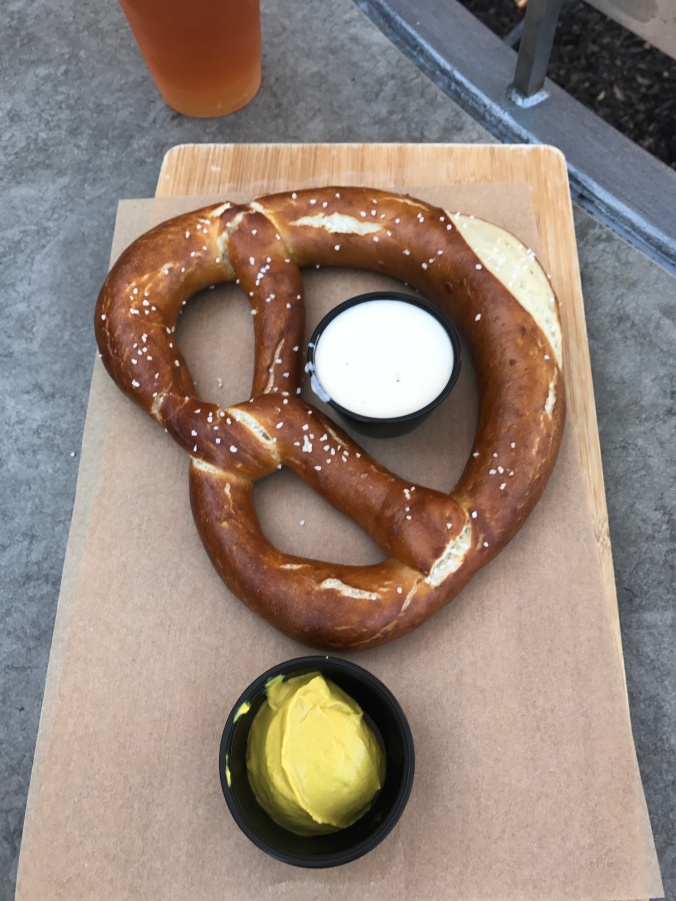 We cured my hunger with a beer, cider, and this fancy pretzel! 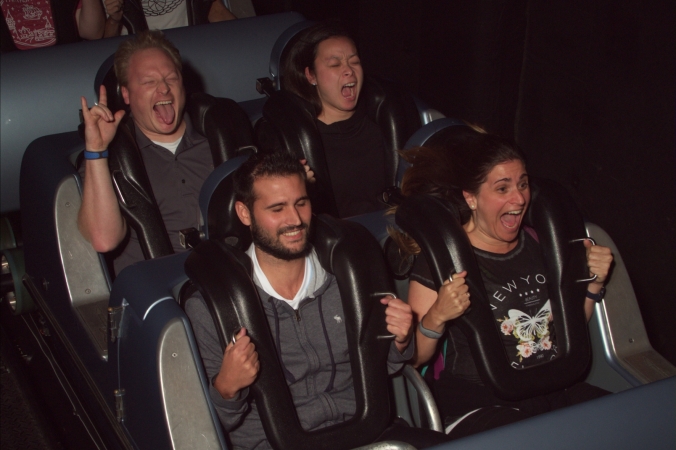 After that, we had time for one more ride on the Rockin Rollercoaster. 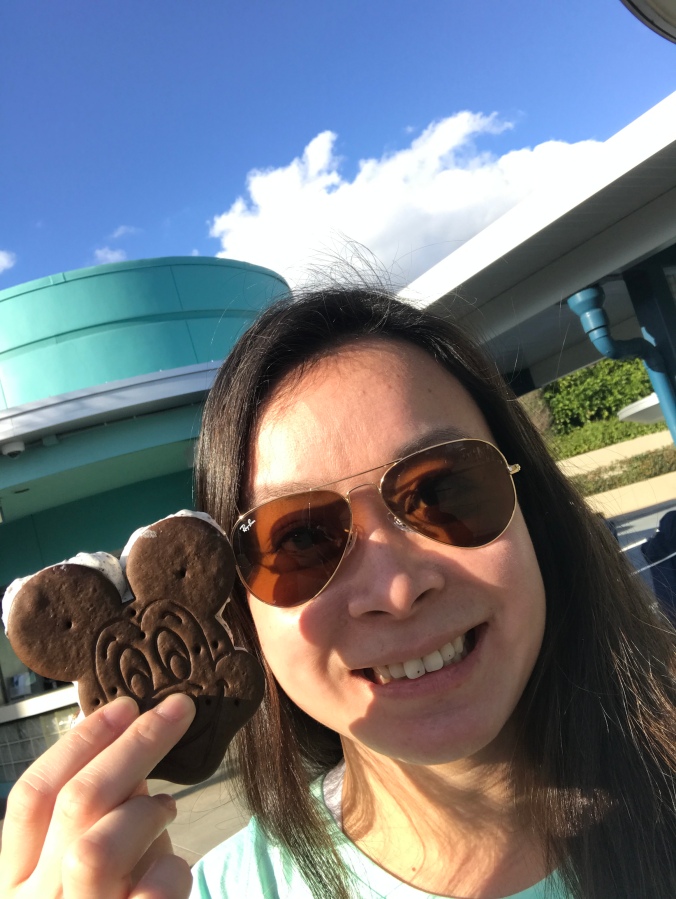 My last Mickey ice cream of the trip. (Apparently with some of it in my teeth too. Glad The Hubster let me know…) 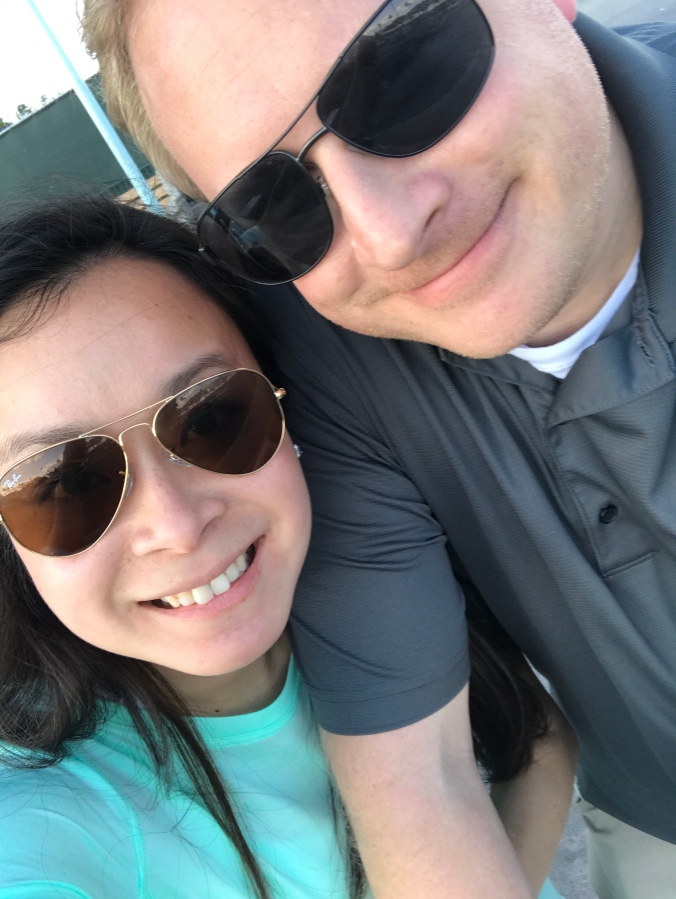 Our last picture together for this trip. (And minus the ice cream in my teeth.)

We headed back to the hotel so The Hubster could catch Disney’s Magical Express to the airport.

I was staying behind and leaving for DC in the morning. And since I wasn’t going to stay in the hotel for the rest of the night, I headed off to Disney Springs. 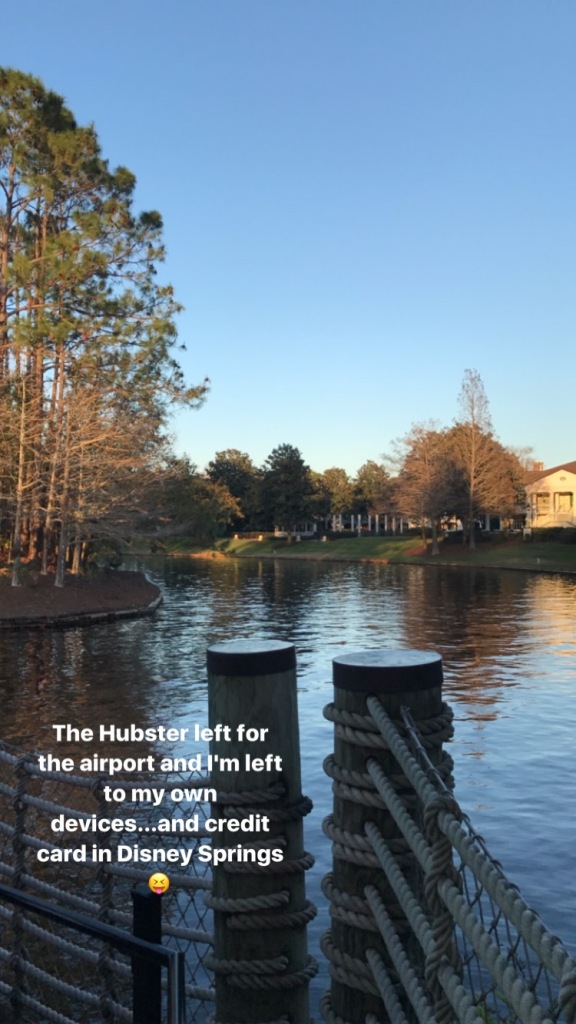 I took a really fun boat ride from our hotel to Disney Springs. 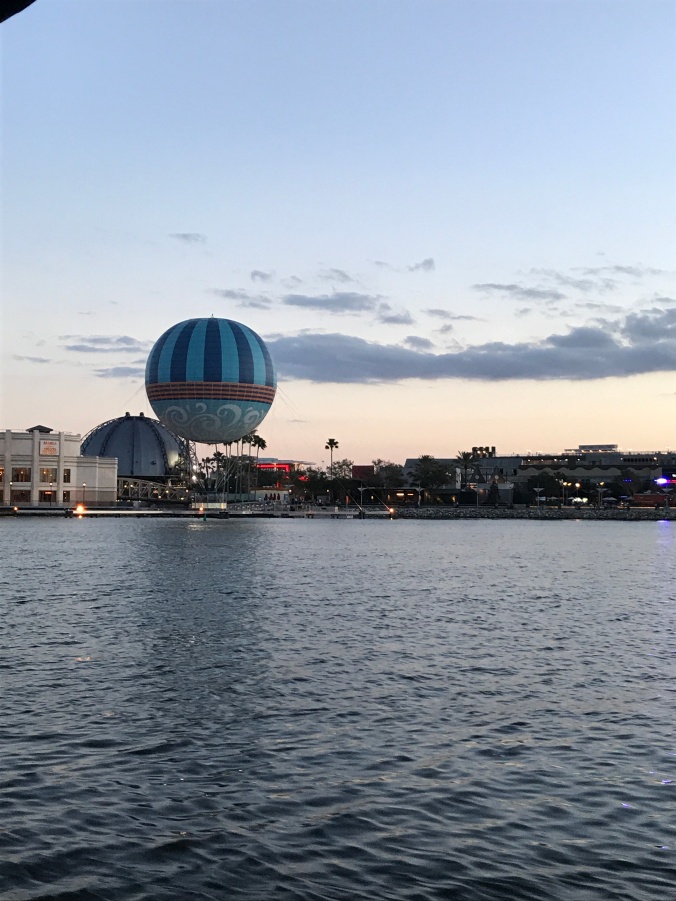 It’s really nice in there! 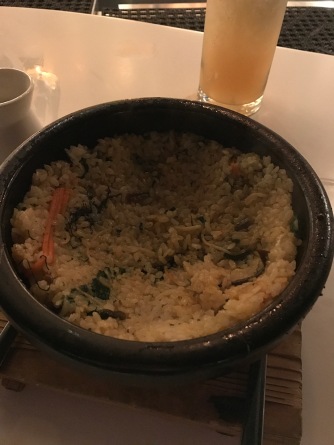 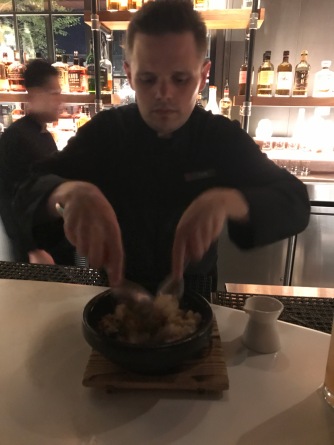 After I bought some fun souvenirs (a bracelet, a present, and some earrings), I went back to Morimoto’s and ate a buri bop bowl (without fish) at the bar.

It was just as delicious as the night before. 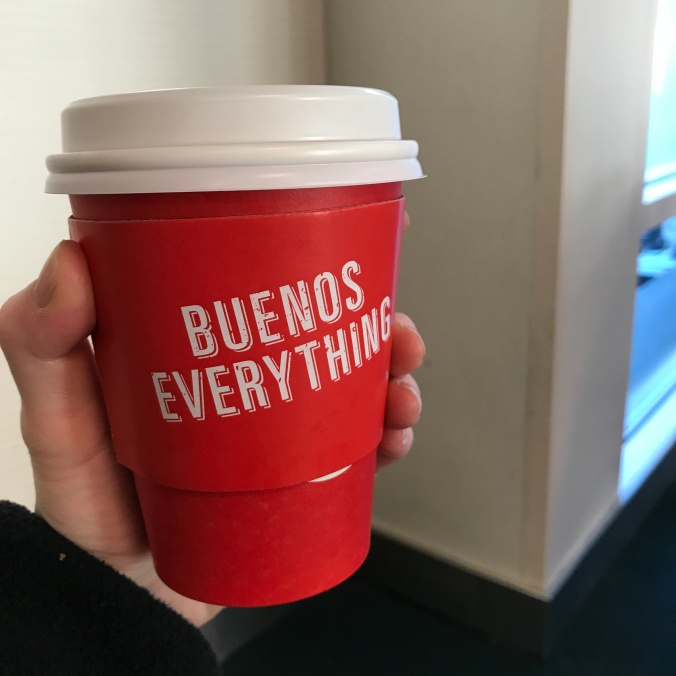 In the morning, I had a cafe con leche at the airport and it’s so good and I need to get another one soon. 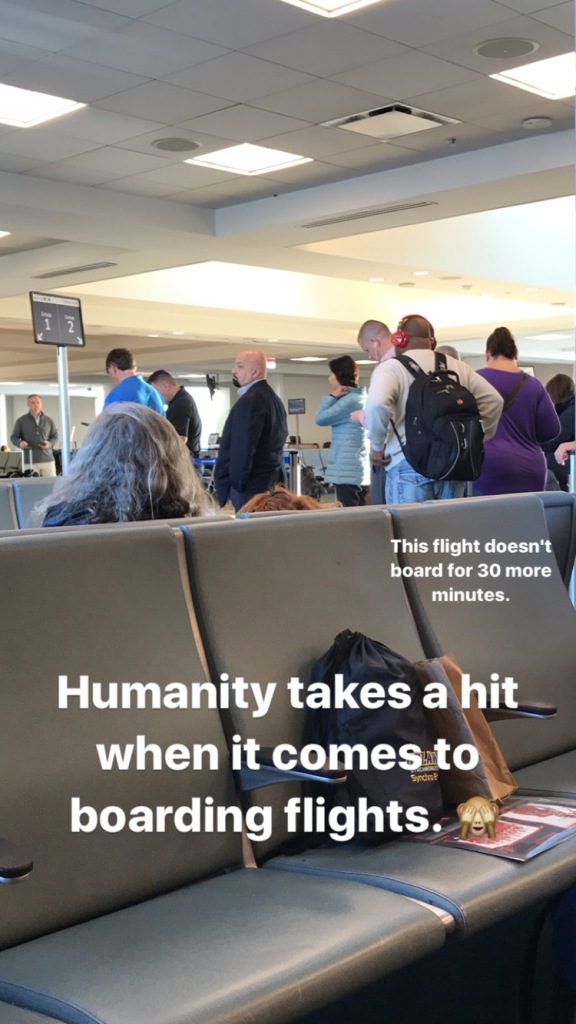 I cannot get over how crazy people are when boarding flights.

We’re all getting on the same plane.

You have a seat already assigned to you.

A conversation for another day. 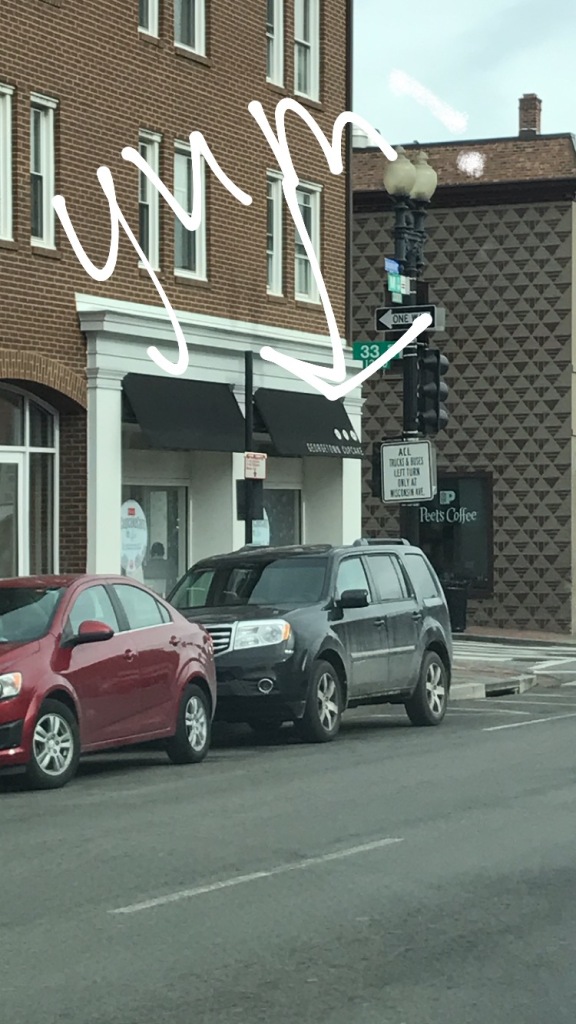 When I got to DC, I drove by Georgetown Cupcakes. Unfortunately I had an appointment and I couldn’t stop, but when I (safely) slowed down to look in the windows, it looked amazing.

Next time I’m in DC, I’m getting the cupcakes!!

A few hours later, I was back home and back to normal.

It was a really amazing trip for sure!!!

One thought on “Hollywood Studios!”