The Hubster and I spent our anniversary weekend in Chicago and let me just say – it did not disappoint.

If you don’t want to see the pictures and read the recap then just use this as the highlight reel:

We ate so much food that even today, Wednesday, I’m contemplating not eating for another few days.

Yeah. That much food. It was amazing. I don’t know if I ever mentioned this but when I park in the parking lot at the airport, I take a picture of my location. Because I’ve totally come back from trips and wandered around only to find that my car was in a completely different lot. (Okay – that only happened once.)

If you have this problem, do this because it totally works!

We started the trip out right with some food and drinks at Bar Symon.

I know this is an airport restaurant, but it’s still an Iron Chef’s restaurant!

I know we’re married and this was an anniversary trip and all – but dude, you cannot have half of my space. 🙂

We got to Chicago super fast – it was about an hour flight. And headed right to our hotel.

There are so many nice hotels in Chicago and some of them are a little expensive. We contemplated staying at a fancy hotel, but then we decided that if we could save a bit of money on the hotel and instead do some more stuff that it would be worth it.

Just an FYI though. We stayed at the Courtyard Marriott and it was in the perfect location. We were close to tons of shopping, all the restaurants we could have imagined, and the hotel was really nice. 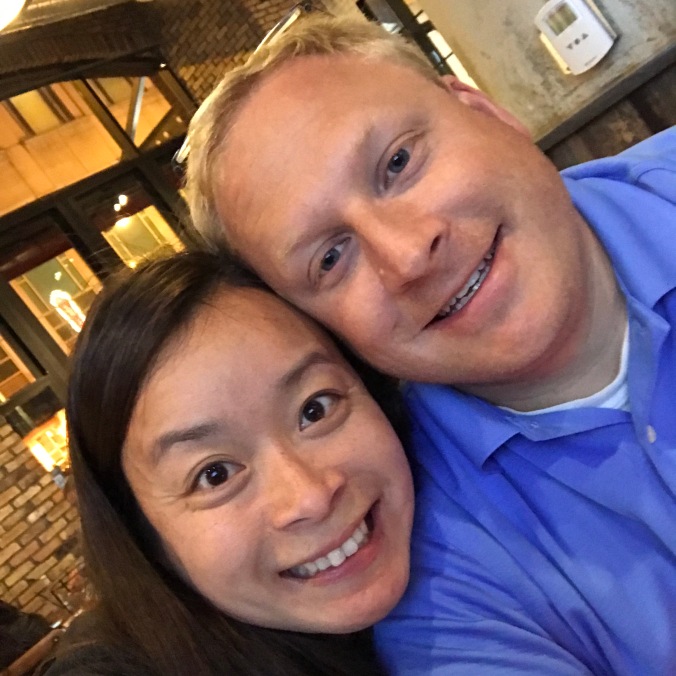 I was starving by the time we got to the hotel and after we checked in, my tummy lead me out to dinner. 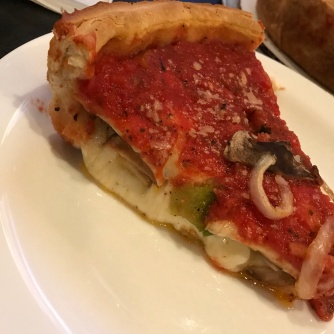 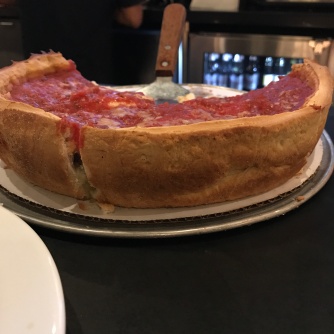 What better meal to have then a classic Giordano’s deep dish pizza?

But let’s be honest about what this pizza is actually. A large circle of cheese with some sauce on top. haha

Saturday morning we decided to do a little sightseeing in the morning and on the way, we stopped at a Starbucks that  happened to be in a Target.

This was the hippest Target I’ve ever been in!

The Hubster wanted to get a coffee and get on our way, so I didn’t get a good look around, but from what I saw, it was really cool. 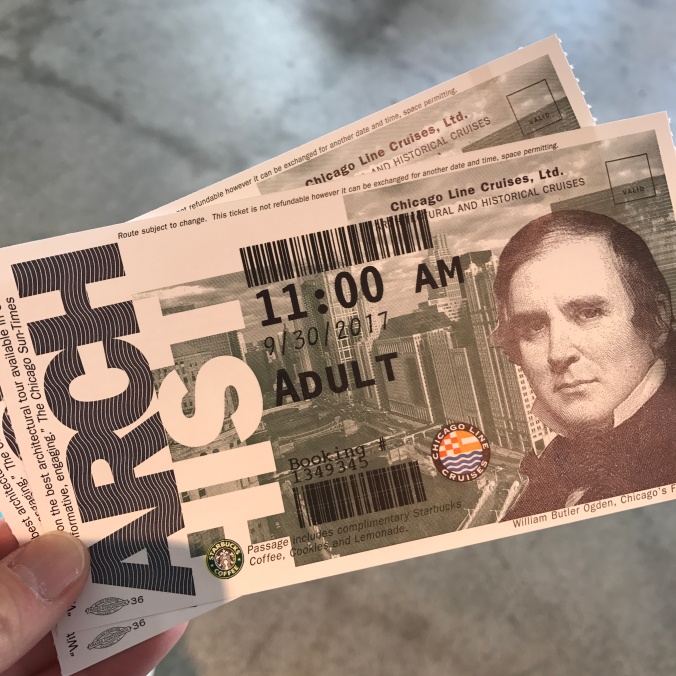 We heard that the architectural tours on the Chicago River were awesome, so we bought tickets and hopped aboard. 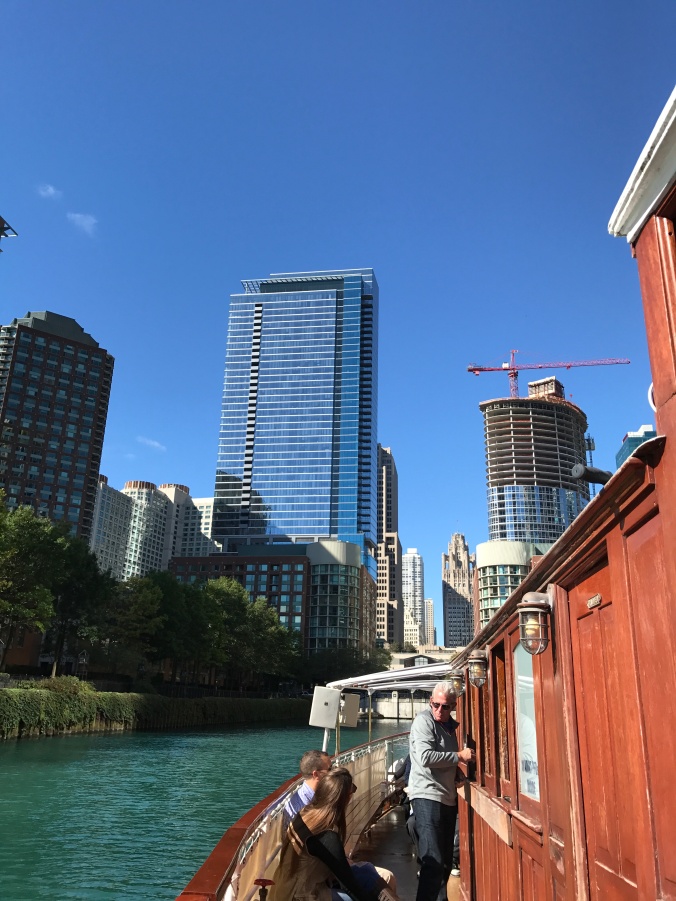 We had a fantastic weather day – it was a little cool but with my jacket I was okay.

And the city of Chicago is beautiful to cruise around. 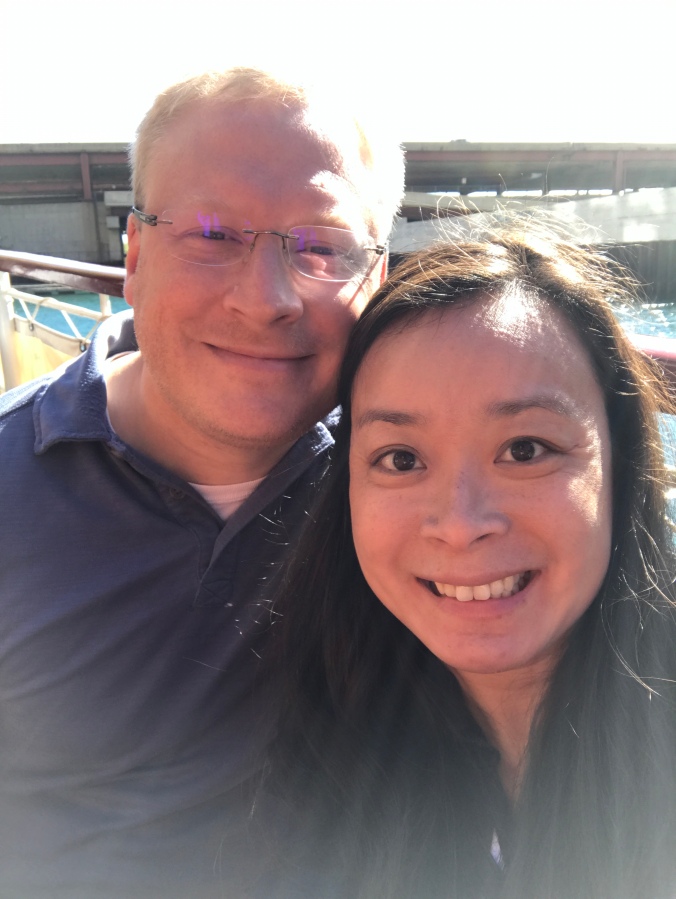 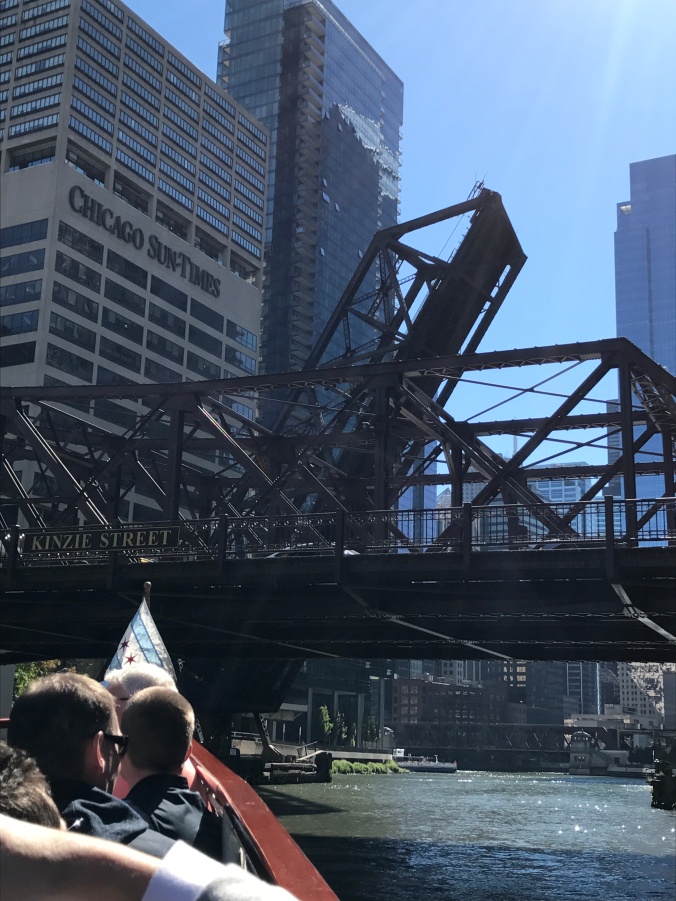 This is the Kinzie Street bridge. It’s famous because Dave Matthews Band tour bus emptied their holding tank into the river onto a tour boat off this bridge.

During the tour, I couldn’t stop singing The Way You Look Tonight because it’s on these boats that Julia Roberts and Dermot Mulroney danced on a riverboat and he sang to her in My Best Friend’s Wedding.

The Hubster declined to dance with me. 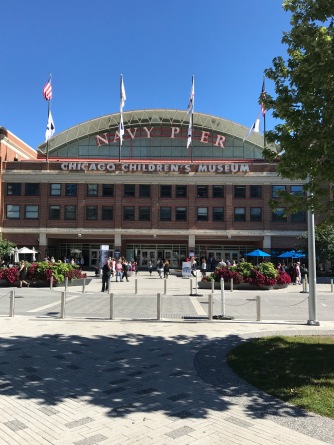 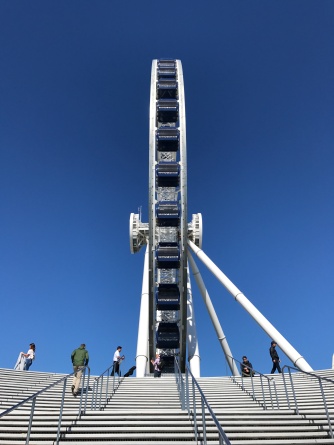 From our boat trip, we took a short walk over to Navy Pier. There is a giant ferris wheel that I declined to ride. But each car is temperature controlled so if you have the desire to go in the winter, you totally can. 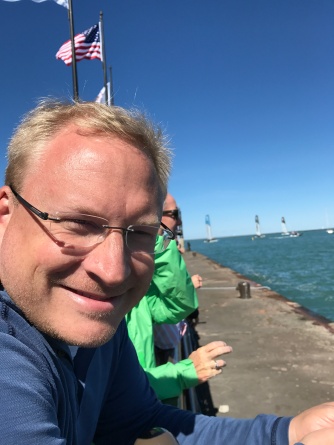 At the end of the pier, we happened upon a catamaran race, so we hung out and watched it for a little bit. The boats had great weather for the race. 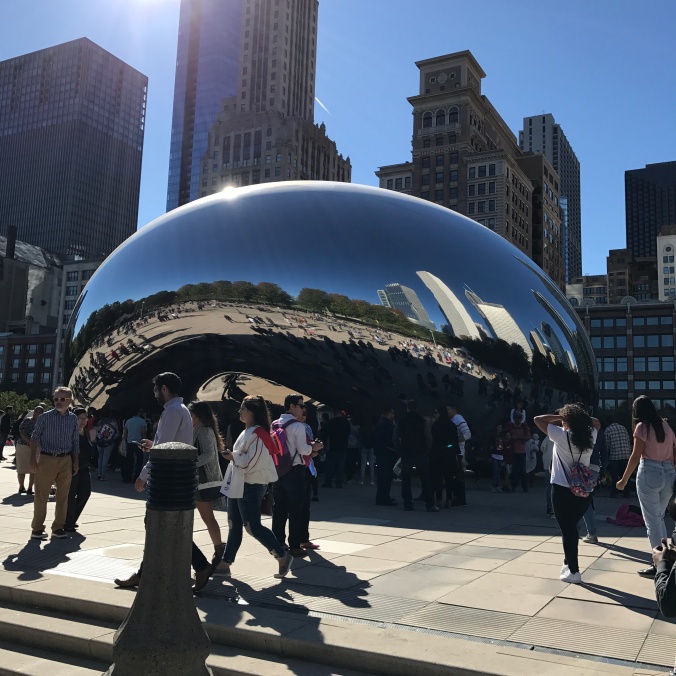 Then we walked over to The Bean that everyone talks about. It’s pretty cool to see in person.

Us in The Bean 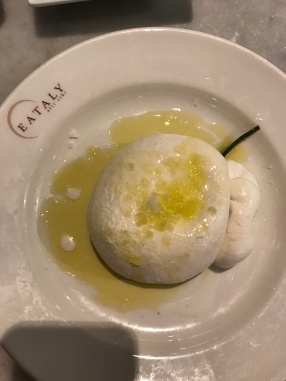 We ended up at Eataly for dinner.

There’s a market with every kind of pasta, cheese, meat, sauce, condiment you could dream of.

Then there’s the food.

I had a burratta salad. This means it’s fresh mozzarella cheese with cheese inside.

Me. Every Single Day.

The Hubster had a delicious beet salad and a steak.  I topped my cheese off with some risotto. You know – more cheese. 🙂

We were stuffed after that meal. So instead of dessert right away, we walked around Eataly for awhile. 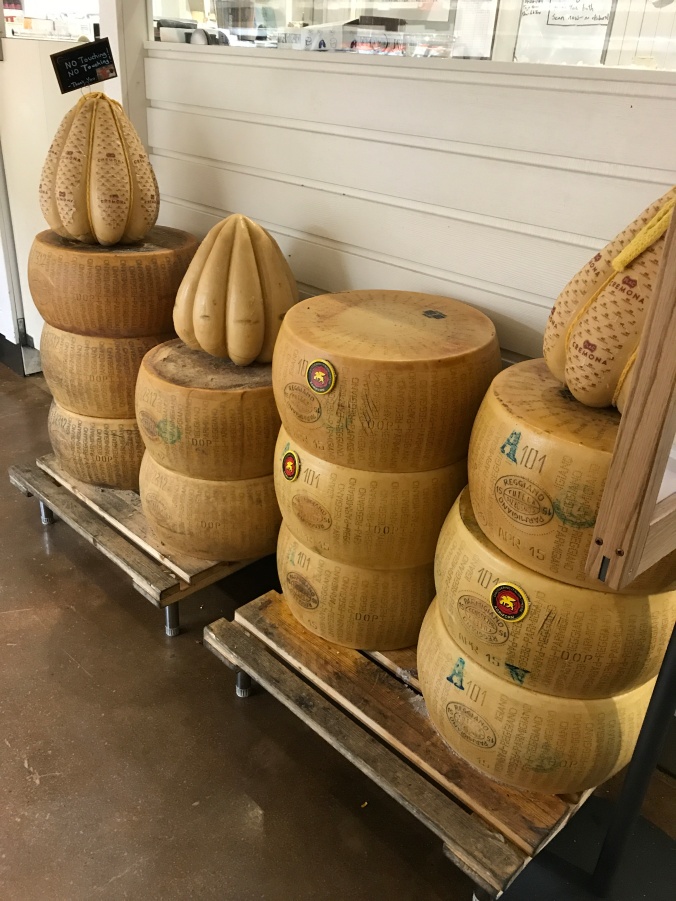 These are giant wheels of parmesan just sitting around, you know, aging. 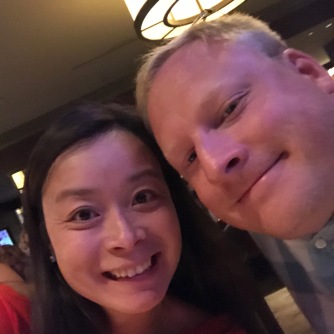 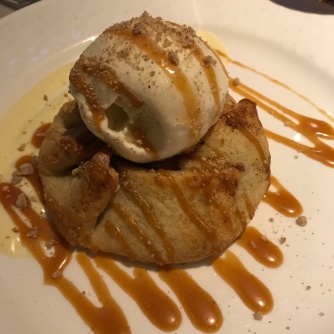 Of course, we should have gone back to the hotel and not continued to eat.

We didn’t do the smart thing.

We headed to Michael Jordan’s Steak House for dessert and a drink.

I’ve alluded to this before, but I love sports and basketball was my favorite for years. I play, watched, and breathed basketball.

Michael Jordan is the greatest of all time.

So when in Chicago, it was perfect to be in his restaurant!

It did not disappoint.

The peach tart was soooo good.

Totally worth not going back to the hotel and continuing to stuff our faces. 🙂

Then we headed back to the hotel and chastised ourselves for making bad food decisions.

We wished we had bigger stomachs because the 23 layer cake looked amazing too.

I’m sure normal people wouldn’t have then gotten up the next day and gone to brunch. But we did! 😉

My brother-in-law’s sister lives in Chicago with her husband and we met up with them for brunch on Sunday morning. We ate at this cute little place where the food was amazing (no surprise there) and the mimosas were unlimited. Winner!

Then it was off to Wrigley Field for a Cubs game! 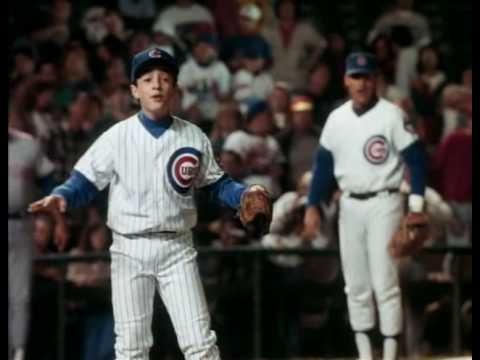 There’s where I learned the field the Cubs played at was.

It was a fun way to spend the afternoon. We had great seats.

The game was so so (the Cubs lost) but we enjoyed being there.

After the game, we took a nap because our dinner reservation wasn’t until 9pm. 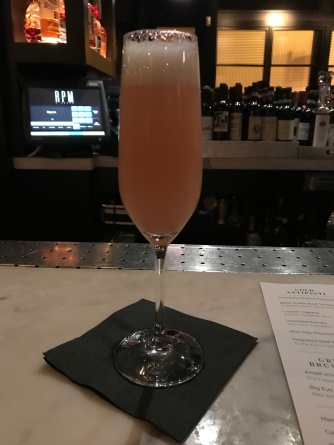 We went to RPM Italian for dinner.

I made the reservations for this dinner a week before and the only times they had available were 4pm and 9pm. We really hoped it was good. Mainly because I only picked it because I loved the show Giuilana and Bill and one of the seasons had them opening the restaurants.

It did not disappoint. 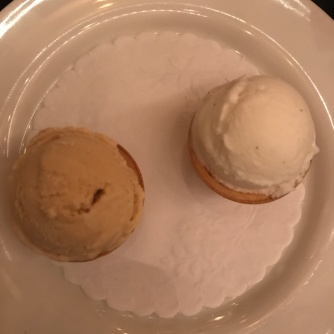 If I could eat that carbonara every day for the rest of my life I would be the happiest girl on the face of the earth. They toss it tableside.

My mouth is watering thinking about it.

And we had these cute little ice creams for dessert.

The most amazing part of RPM was that after we had left the restaurant, we went back to the hotel and I changed into pajamas and got ready for bed. I got a phone call and it was the restaurant saying that The Hubster had left his credit card and did we want to come back and pick it up.

We have no idea how they found us but it was awesome they did.

We got up the next morning, did some packing, walked around a little more, and then it was time to go home.

This trip was just what we needed – a fun little getaway to enjoy each other’s company and do some fun things together.

One thought on “Chicago Weekend Getaway”